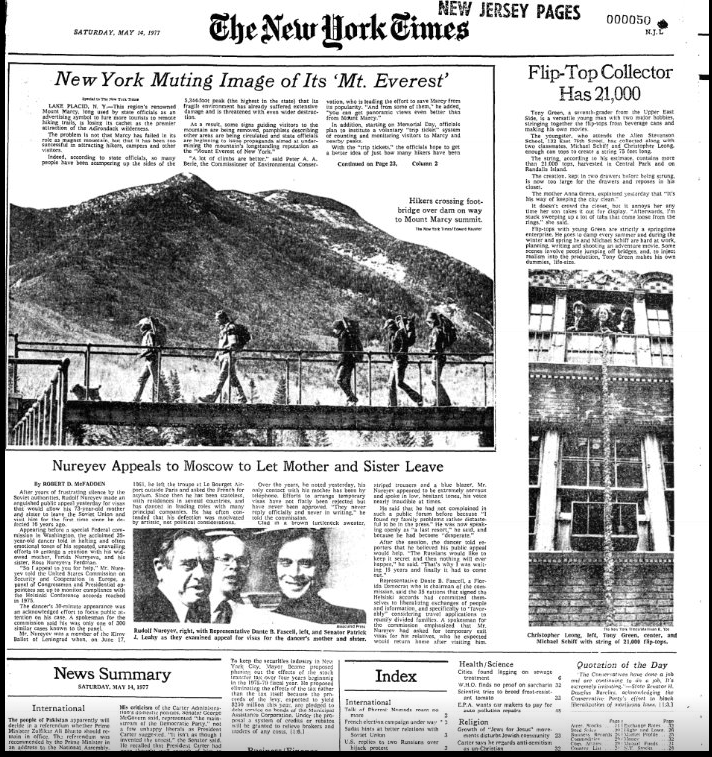 As a follow up of the Atlas Obscura video, we got a great response from Tony Green:

“When I was 12, I collected more than 22,000 flip tops mostly from the Great Meadow in Central Park. I wrote a letter to the New York Times. They published this story on May 14, 1977. Alas, as I grew up I became more interested in sports and young women and I stopped collecting them. Even more sadly, I eventually threw out my collection. But I think it’s great that you have dedicated so much energy to your project. Cheers Tony Green”

Of course we double checked this, and every word is true! On May 14 that year, NYT wrote:

“Tony Green, a seventh‐grader from the Upper East Side, is a versatile young man with two major hobbies, stringing together the flip‐tops from beverage cans and making his own movies.
The youngster, who attends the Allen Stevenson School, 132 East 78th Street, has collected along with two classmates, Michael Schiff and Christopher Leong, enough can tops to create a string 75 feet long.
The string, according to his estimate, contains more than 21,000 tops, harvested in Central Park and Randalls Island.The creation, kept in two drawers before being strung, is now too large for the drawers and reposes in his closet.The mother, Anna Green, explained yesterday that “It’s his way of keeping the city clean.”It doesn’t crowd the closet, but it annoys her any time her son takes it out for display. “Afterwards, I’m stuck sweeping up a lot of tabs that come loose from the rings,” she said.Flip‐tops with young Green are strictly a springtime enterprise. He goes to camp every summer and during the winter and spring he and Michael Schiff are hard at work, planning, writing and shooting an adventure movie. Some scenes involve people jumping off bridges, and, to inject realism into the production, Tony Green makes his own dummies, life‐size.”

21.000 pull tabs…. we at Pull Tab Archaeology are absolute beginners compared to that!

Our dream is to make a complete archaeological pull tab typology for the entire world crowdsourced by you. Join the community! Send us your tabs.

Current state of the Revolution (news)

Our dream is to make an archaeological pull tab typology for the entire world. Join the community! Send us your tabs.

Click here for a shipping form, if you prefer one. 🙂