This page will provide some backgrounds on the history and design of pull tabs, in coherence with the dominant narrative which can be found in many other online and printed sources, like beer-can collector manuals and websites and some scientific papers and research posters.

But first, are pull tabs archaeology? Sure they are, especially since they passed the age of fifty years. See this video from the Woodstock dig from 2019, by Binghamton University.

So what is a pull tab?

A pull tab – or ‘ring pull’ in the U.K. – is defined in this project as a device attached to a food or beverage can, with the purpose of providing an easy means of opening that can by tearing off, or pushing in a prepared tear strip in the can end. Although pull tabs can be found on a multitude of different canned products – from sardines and tomatoes, to coffee and motor oil – the Pull Tab Archaeology Project’s primary concern is pull tabs used on beverage cans and with a tear strip.

The origins of Pull Tabs

The evolution of pull tabs is closely related to the development of the metal beer can. In the 1930s can manufacturers in the United States experimented with this form of packaging as a competitor for the common, but in weight and volume less economic glass beer bottle. Although tinned-steel cans had been used for food conservation already since the 19th century, beer proved a challenging product due to the higher pressure inside the can during pasteurization and the property of beer to denaturate (taste bad) in contact with a metal surface.

In 1934 the American Can Company produced the first commercially viable beer can with a flat top, strong enough to withstand the pressure and with an inside liner – patented as Vinylite – that prevented the beer touching the metal. The first marketing attempts yielded successful sales and the can’s market share grew rapidly. It was not before long that Continental Can produced a competitive can which was bottle, or cone-shaped. One year after the introduction in 1935 over 200 million metal beer cans were sold on the American market.

Although can packaging revenue grew exponentially in the first years, the spread of this innovation was perceived to be relatively slow. Traditional brewers doubted if the new lined cans would effectively prevent denaturation and the glass bottle industry fiercely resisted the new packaging developments. The branch launched a new thin glass bottle called ’the stubby’ to counter the market loss and was soon sold in bigger quantities than all canned beer in the United States combined. However, the no-refund, use-once, light metal can proved to be a more economic choice for many brewers in the decades to come. 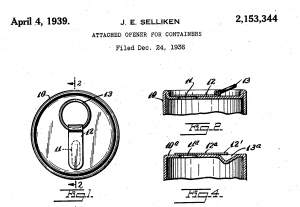 It was not long after the beer can’s introduction that inventors started designing easier means of opening. The first device closely resembling a modern pull tab was already patented in 1939, but never made it to production, possibly because of the outbreak of the Second World War. War policy restricted the use of steel and tin in the consumer market in favour of the war industry.

When the restrictions for consumer products were relieved after 1945, the canned beer consumption really took off. Sales proved metal cans to be economically viable and after 1950 it was clear they would not leave the scene any time soon. Around 1960 aluminum – or aluminium in Europe – was introduced as a material for the can end, which made it much easier to punch open. A ‘can end’ is the flat top of a standard can. By 1960 people had gotten accustomed to opening tin-plated steel beer cans with a special tool called a ‘church-key’. This device was used to make two triangular holes in the can end to access its content. The flat-top cans which used this type of opening where therefore also called ‘punch tops’. In the brief time-window in which steel ends were replaced with aluminum ends, the latter were called ‘soft tops’. However, soft tops did not make it long in the world of packaging…

Striving for an even easier opening means than punching holes in aluminium, Ermal Fraze in Ohio invented the first pull tab around 1961, consisting of a a solid ’tab’ riveted to a scored tear strip in the aluminum can end. The design was test-marketed firstly by ALCOA and the Pittsburgh Brewing Company in 1962 on ‘Iron City Beer’. In 1963 Fraze patented a new design which would further revolutionize the market and would soon make the punch top and church key obsolete (see also the work of archaeologist W. Schroeder at Montana University 2017).

The introduction in 1962/1963 of the solid pull tab (sometimes referred to as ‘zip-tops’) was followed by a commercial patent war between can manufacturers for ingenuity and market share. Responding to complaints about low grip and sharp edges of zip-top tabs, which apparently cut fingers and lips, American Can Company (ACCO) started production of one of the first designs in 1965 using a pull ring, in stead of a solid flat zip-top tab. In effect the rings on these tabs proved too small to actually put a finger through for pulling, so the design was replaced by bigger rings that same year by ACCO and by Continental Can in 1966. Both companies introduced designs that in essence would stay in production for at least a decade in the USA and longer in other countries. Cans sold in the Dutch market at the end of the 1980s still held a tab very similar to the one produced by Continental in 1965-1967.

Responding to consumer and governmental complains that the ring pull tabs could still cut hands, lips and feet when stepped upon on recreational beaches, were sometimes swallowed when put in the can, and were littering the environment, can companies switched to a new style of tab in the 70s. Instead of tearing a scoured tear-strip from the can, these new ‘stay-tabs’ or ‘statabs’ would now push and bend the tear-strip downwards into the can without the tab detaching from the can end. Partly under pressure of legislation in some USA states, manufacturers switched fully to statabs after 1975 with designs patented with names like ‘Easy Open Ecology End’ or ‘Envirocan’ . European countries made a similar switch some 10 to 15 years later.

Pull tabs are here to stay-tab

As our Pull Tab Archaeology project will show, developments did not stall after 1975. In continued efforts to ease opening, reduce costs and gain more profit, tab designers have come up with numerous small variations and improvements up to today. The number of different types of pull tabs that exist in the world is unknown and just one of many questions addressed in our project. Beverage cans and tabs have come a long way since 1934 and there is no indication they will leave shortly. The Container Recycling Institute reported 100 billion units of beverage packed and sold in cans with pull tabs in the Unites States alone in 2010. That is on average over 31.000 cans every second! A 2017 chart of Can Central depicts the economic impact of beverage can industry; it shows a market share of 71,8 billion US-dollar every year and provides close to 83000 jobs in the USA.

Although the market, ideas about packaging and society will keep evolving – and let’s not forget the notion that climate change might threaten everything we know to be our world – one thing is sure: archaeologists today, tomorrow or 10.000 years in the future will keep finding 20th century pull tabs in every corner of the planet for ever.

Collectors and can information: